WOMAN: AS A MOTHER, WIFE AND PUBLIC SERVANT

It is a fact that women nowadays are already internationally known as an 'all around homebody'. She may be a wife, a mother or a popular public servant.

In my country, nobody can question the legacy that every woman can give: be it to her family or the society. A woman who can do the job well-done is somehow a 'super woman' but it is happening around us. It is because, women are becoming career oriented while being a doting mother and as a submissive wife. Though submissive, because ours is a paternal society, yet, her decision-making can be firm and referred-oriented.

She can be a public servant in many ways. Many health workers in local Health Centers are married women. Politics is not behind, it can be her advocacy to join the wagon of women in politics joining the world that used to be for men only.

Tags
Impact of Women in Society

World Council of Credit Unions conducted a survey on Women's Participation in Credit Unions in 2014.  The data was provided by 36 out of 46 respondents (78%) who were women from national CU associations.

Further details can be found in the Member Services folder of the Resource Library. 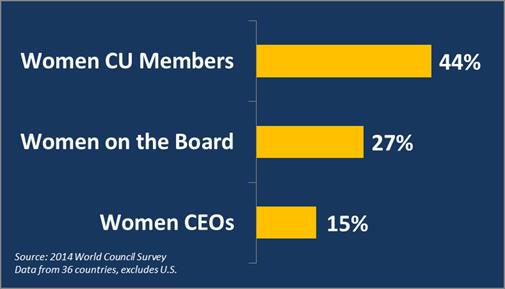 I've just had an opportunity to review the proposals that were submitted by the 6 scholarship applicants.  I have to say I am so proud of each and every one of these ladies. The hard work and dedication that is required to not only prepare the proposal but the effort that will be necessary to implement them is a measure of their commitment.

I just wanted to congratulate these women on a job well done.  I wish you all the best of luck!

Where Have All the Cowboys Gone?

Kudos to the credit union community is more gender diverse than many industries. Filene Research Institute released a study, Women in Leadership: Obstacles and Opportunities, earlier this year, which states that two-thirds of CEOs at credit union with less than $50 million in assets are women. However, in the $100 million to $500 million range, the figure is only 20%, and at more than $500 million, the stat is just one in eight credit union CEOs are women. Globally, male CEOs dominate credit unions of all sizes. Then there’s this directly from the April report: Women comprised only 41% of credit union senior staff in 2012 despite making up 70% of the credit union workforce in the U.S.

The reasons for this vary. Certainly many women make legitimate decisions on the home front that they feel they can’t or don’t want to balance with a career. Filene’s April 2014 study noted that fewer women aspire to senior management. But it also found that employers nudge men and women in stereotypical directions that lead women to areas of the business that are not considered senior management track departments. For example, the head of HR is typically considered an “appropriate” role for women. Or marketing (which should be considered much more important than it generally is, but that’s another discussion).

What perpetuates the stereotyping? Society? Some basic evolutionary instinct? Whatever the cause, it needs to end. The statistics don’t need to move closer to 50-50 out of a sense of fairness. Diversification is not an equal rights issue. It’s a business continuity issue. Continuity in the sense of prosperity and the fact that there will not be enough qualified Gen X men to fill the spots vacated by those who will be retiring over the next decade. According to a University of California-Davis report, among the 400 public companies in California, the top 34 firms with the greatest gender diversity at the senior management level earned three times more revenue and 50% higher profit than the average company in the study.

In order to move toward greater equality and prosperity, we must acknowledge and educate. Part 2 of Filene’s research series is coming out next month, Credit Union Women in Leadership International Research Series Part 2: Attributes and Challenges. Filene is hosting a colloquium to discuss the results of the next survey on June 19. As of this writing the event had 68 registered attendees, only four of who are men and one is a professor at the University of Southern California where the event will be held. Go West!

Women’s issues are not just women’s issues. They are your business issues, your daughters’ and your wives’ life and career issues. It can be uncomfortable for men to address the issue of gender. I applaud the men at Filene like Mark Meyer and Ben Rogers for tackling this issue. Some male executives might be afraid of saying the wrong thing so they bury their heads in the sand, but Filene and the handful of men attending their colloquium are lassoing this issue that is bucking just under the surface to obtain a better grip on the future of the workplace, leadership and how it can improve credit unions.

“If you’re not aware of what the data says, then it’s easy to put it aside,” Rogers explained of Filene’s research. If it’s not in your life experience, it’s easier to turn a blind eye. True leaders read the landscape, saddle up and ride that pony—not off into the sunset but into the sunlight. Do you have the spurs?

Tags
Challenges Facing Women in Leadership Positions, Engaging the Next Generation of CU Members, Impact of Women in Society

tmagreta@mudisacco.com | April 28, 2014
8 Comments
At Mudi SACCO we have just had our Annual General Meeting for 2013 on 26th April, 2014. Being a female General Manager for this SACCO, I am very happy to see, my fellow two women scooping two seats in the Executive BOD of four, making it 50-50. All the past years it has been men only or just one lady in the executive. Indeed, its time women we need to break the ceiling. "WE CAN". Sisters, share your experience at your Organizations/C.U/ SACCOs.
Tags
CU Boards / Volunteers, Impact of Women in Society, Program Updates

scooke@cutimes.com | April 08, 2014
6 Comments
I never go to the doctors. I know that's bad, but I'm relatively young and never had any health issues before. It's a waste of a lot of time (and money) to go for annual physicals only to have the doctor tell you you're fine, which you already knew. It's like asking a meteorologist what the weather is currently while standing next to an open window.

But you never know what's brewing over the horizon. As I'm rushing headlong toward 40 in the next couple of years, I'm finding it's not so hard to take the time as I previously thought. This is in part because I have come to realize the world does not fall apart if I spend an hour or two at the doctors every once in a while. Or when I finally determine a day or two when I can take time off, I actually make an effort to take the time off.

Women tend to take care of everyone but themselves, whether it's kids or parents or significant others. They insist any of those loved ones go to the doctor's office immediately or take it easy when they're not well, yet women do not require the same of themselves. Many work full time, come home often to do most if not all the domestic chores, volunteer, and run kids to various activities in the evening.
Given that the Centers for Disease Control and Prevention found that stress-related illnesses were twice as high in women than men, working women's health is of particular concern. Work-related stress was also linked to heart disease, muscle and bone disorders, depression and burnout. In fact, job stress affected immunological biomarkers in a test performed on female nurses. In addition, 1 in 8 adult women binge drink and a large percentage come from homes with $75,000 or more in household income. Women also feel nervous-or at least admit to it-more than men. The National Health Interview Survey by the CDC found that women felt nervous most if not all of the time in the 30 days running up to being interviewed for the study, while 12% of men said they did. And yet women's life expectancy increased. We must be tougher-go figure.

Women may be able to out-multitask men, but that doesn't mean we always should. Take time off to see the doctor or to kick your feet up with a glass (or two) of wine. How much damage can the men really do while we're away?

I recently received the link to this video.  It's thought provoking and perhaps could start conversations about usage of technology helping women by providing the flexibility that so many of us need and if done properly by organizations will allow us to take advantage of that flexibility guilt free.

"How can we get people more engaged, more productive, and happier at work? Is technology part of the problem – and could it also be part of the solution? Dave Coplin, Chief Envisioning Officer at Microsoft, imagines what might be possible if more organisations embraced the full, empowering potential of technology and encouraged a truly open, collaborative and flexible working culture."

Great article in the CU Times today.  Some of our sisters are featured in this article that focuses on  the benefits of having women on boards, some of the barriers women are facing and ways to remove those barriers.

lisa.bonin@servus.ca | February 04, 2014
0 Comments
I've posted a great document in the Resource Library.  The Conference Board of Canada published this briefing by Naoko Hawkins called "Overcoming Barriers to Leadership for Young Women".  The focus is on the barriers that millenial women are facing in advancing in leadership.  There is great food for thought here and I feel it is applicable for all women, not just millenials.  Take a look and let me know your thoughts!
Tags
Challenges Facing Women in Leadership Positions, Impact of Women in Society
1 2 3 4 5